Showing posts from May, 2013
Show all

Can you guess the number one art find of 2012?  If you've followed this blog for any amount of time you probably can. Yep, that's right Action Comics No. 1.  While remodeling a house bought for $10,100, David Gonzalez ripped out a wall and found a pristine copy of the Man of Steel's first comic appearance.  It has already been bid up to $113,000 and would be worth more except the cover got ripped after Gonzalez found the book.  That rip dropped the book's value by $100,000.  The last pristine copy of AC 1 sold for over $2 million. Some other notable finds of 2012 according to HuffingtonPost.com are a lost Da Vinci found in a Scottish farmhouse, which if it turns out to be real, is estimated to be worth over $150 million.  A $7 flea market find that led to the recovery of a stolen Renoir snatched six decades ago from the Baltimore Museum of Art and a painting titled "The White Owl" by William James, a pre-Raphaelite artist, was found in an attic and val
8 comments
Read more

...and I do mean direct!  In the 2002 movie Minority Report starring Tom Cruise, the protagonist enters a mall, is scanned, and then targeted by a variety of direct marketing ads. See for yourself! Today you are scanned the moment you sit at your computer and begin shopping on the internet.  As Michael Learmonth says in "The Pants that Stalked Me on the Web," after shopping for a pair of shorts he began receiving internet ads aimed at his desire to buy summer pants.  Being a marketing executive he "know[s] why I'm getting these ads. But as a consumer I'd be creeped out by it, and definitely a little annoyed." On the other hand, Miguel Helft and Tanzina Vega report that "this form of highly personalized marketing is being hailed as the latest breakthrough because it tries to show consumers the right ad at the right time."   So internet advertisers are doing us all a favor, we aren't inundated with ads for products we aren't interes
9 comments
Read more

You Need a Library Card 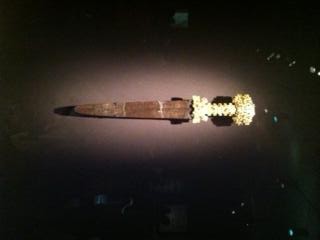 Why you ask? There's a couple of reasons.  First if you have a long commute (mine is 1 hour each way), and you are sick of the radio or want to try something different, you can check out any number of audio books. If you like comics you might check out The Amazing Adventures of Kavalier & Clay by Michael Chabon.  If you are taking a literature class, most classic books are available on CDs.  Listening to a book is a great way to discover new things about a text using an audible learning style. But what does this have to do with the sword in this post? My library card got me into San Francisco's Asian Art Museum to see China's Terracotta Warriors for FREE - and what an incredible exhibit.   China's Terracotta Warriors were commissioned by the First Emperor, Qin Shihuang (259-210 BCE) conquered much in this life, but his driving purpose was even greater: He sought to conquer death. In order to achieve immortality, he built himself a tomb—a vast undergr
4 comments
Read more

Keith Patterson recently created an infographic that explores how the 1920's world of Jay Gatsby stacks up against the rich and famous today -- specifically the rich and famous who are playing the roles of the Roaring Twenties uberwealthy characters in the recently released Great Gatsby movie directed by Baz Luhrmann. Click here to view the full-size original over at Electric.com . According to Patterson, "Fitzgerald's young artist, writer and multi-talented friends inspired his classic novel about one of America's most indulgent periods."  How do you think the nouveau riche of the new millenium compare to those at the beginning of the 20th century?  How do you think our hip-hop, movie star, reality TV megalomaniacs compare to the characters of The Great Gatsby ?   How do books reflect culture?  If you wrote an updated version of The Great Gatsby where would you set your book and how would you define your characters?
14 comments
Read more
More posts