Showing posts from February, 2013
Show all

I may love spell checker, but sometimes I think it makes writers lazy.  I know I often have to open up a blank Word document to check on a simple word that I can't remember how to spell. This poor student has spent way too much time in front of his or her computer and can no longer spell.   If you type the following poem into Word, not a single word comes up misspelled and, according to Word, there are only four grammar mistakes. Eye Halve a Spelling Checker I halve a spelling checker It came with my pea sea It plainly marcs four my revue Miss steaks eye kin knot sea. Eye strike a key and type a word And weight four it two say Weather eye am wrong oar write It shows me strait a weigh. As soon as mist ache is maid It nose bee fore two long And eye can put the error rite Its rare lea ever wrong. Eye have run this poem threw it I am shore your pleased to no Its letter perfect awl the weigh My check tolled me sew. Have spelling and grammar
52 comments
Read more

February 18, 2013
Asteroid DA14 just streaked by the earth on February 15 - half the size of a football field. The day before a meteor hit Russia causing loads of damage and panic, and according to the experts these two events are unrelated. Want to watch NASA track a DA14? Here's the footage: Video streaming by Ustream Here's something to think about. An asteroid the size of DA14 hit Earth on June 30, 1908 and levelled 820 square miles. Accourding to NASA when DA14 makes its closest approach to Earth at approximately 11:25 a.m. PST (2:25 p.m. EST / 19:25 UTC), the asteroid will be about 17,150 miles (27,600 kilometers) above Earth’s surface. The commentary will be available via NASA TV and streamed live online at: http://www.nasa.gov/ntv and http://www.ustream.tv/nasajpl2 Many objects in outer space are discovered and tracked by astronimacal enthusiasts, people just like you and me. Should we have an agency that watches for these kinds killer asteroids?
2 comments
Read more

If you carefully look at the above rendering of the Saturn V Rocket, you will notice that the creator has used some pretty simple terminology. In fact, Randall Monroe employed only the 1,000 most frequently used words in English. Under this restriction, the rocket was called "up-goer five," the command module was "people box," and the liquid hydrogen feed line was "thing that lets in cold wet air to burn." The comic inspired Theo Anderson, a geneticist who supports accessible science education, to build a text editor that would force the user to write with only the 1000 most frequent words. He then invited scientists to describe what they do using the editor. Mental floss reported on the project which has been turned into "18 Complicated Scientific Ideas Explained Simply", scientific ideas ranging from olfactory biology, web development and political economy to paleomagnetism, particle physics and circadian rhythm biology where "Littl
6 comments
Read more

Are Your Ancestors Super? 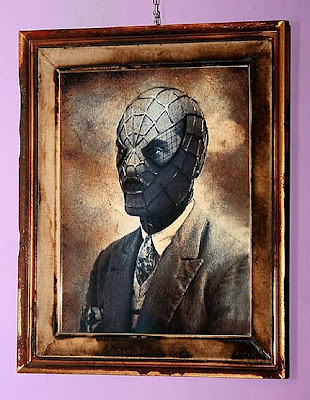 At Foto Marvellini, an art workshop in Milan, two brothers have released the family photos of your favorite superheroes. How they came across so many vintage portraits is unknown, but these pictures answer a lot of questions about why some superheroes adopted their demeanor, garb, and sensibilties. Take Spiderman for example. Most fan boys and girls believe it was a radioactive spider that produced the web-spinning acrobat, but according to family tradition there seems to be an early twentieth century dapper dude who first donned the spidey mask. Maybe the spider gave Peter Parker his super powers, but there are some spiders in his family closet. This portrait of Captain America's great-great-great grandma may explain his patriotic roots (and style) as the Victorian lady displays the cameo shield familiar to most readers. Batman enthusiasts may now understand the penchant for the furry flying mammals as Great-grandad Wayne studies his stocks and bonds. No wond
19 comments
Read more
More posts