Showing posts from July, 2012
Show all

Job Skills and the New Millennium

While you thought getting a job was hard, keeping a job is just as hard, especially in the new millennium. Most employers think recent graduates were born with all the computer skills they need from tweeting and designing websites to email and Facebook. But what do you do when your boss asks you to create a portal on Google docs for clients to give performance feedback. Huh? With unemployment hovering around 8 percent, many employers find it unnecessary to supply in-house employee training. They figure if you want to keep your job, you'll figure it out on your own. But taking another class costs time and money. So what is a new hire to do get up to office speed? Take a FREE online course. ALISON —an Irish company with an uncatchy longer moniker: Advance Learning Interactive Systems Online—provides free online courses in job-friendly skills. Some are basic but essential—Fundamentals of Google Docs or Touch Type Training. Others are more specialized (Programming in
16 comments
Read more

Did you read F. Scott Fitzgerald's The Great Gatsby in high school or college? Did you have a hard time keeping track of who is who? SomethingSoSam.com created a slick art deco Gatsby Character Map to help you keep track. But SomethingSoSam didn't stop there, there are also some graphics of memorable Gatsby quotes , like this one: To finish off this trilogy of visual fun, here is a video with a little bit more about the Gatsby characters . . . A Look Into the Characters of The Great Gatsby from SomethingSoSam on Vimeo . It's obvious this graphic artist is passionate about The Great Gatsby . Warner Brothers would be well served to hire SomethingSoSam to create the posters for their movie slated for release December 2012. It is billed as an "American 3D romantic drama film", and stars Leonardo DiCaprio as Jay Gatsby, Carey Mulligan as Daisy Buchanan, Tobey Maguire as Nick Carraway, Joel Edgerton as Tom Buchanan and Isla Fisher as Myrtle Wilson.
14 comments
Read more

Two apostrophes in one title? Not possible? Well, it's obviously possible, but text messaging may mean the death of my belov'd apostrophe. That's the claim in the article Dear Apostrophe: C Ya over at the Chronicle of Higher Ed. The author, Rob Jenkins, believes that as someone who teaches college writing to the text-messaging generation, I have observed that not only apostrophes but also capital letters have become, if not extinct, then at least increasingly conspicuous by their absence–sort of like some of my students when their essays are due. Yikes! Not only does he dis students for bad grammar, but he also doubts their veracity when it comes to absences and due dates (c'mon you know you are at least a little guilty). I love apostrophe's. In fact I love them so much that I use way too many of them. While Jenkins worries about capital letters and apostrophes because of text messaging, I worry about too many spaces in my writing. I find that wh
23 comments
Read more 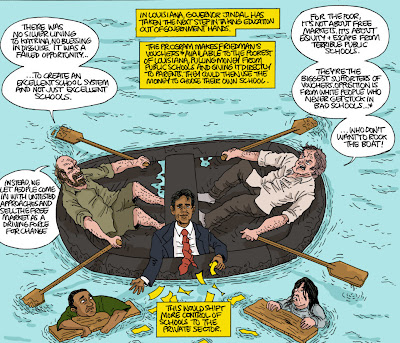 A comics journalist and an assistant professor walk into a bar. What'll ya have? asks the barkeep. "Pictures of Reformtinis," says the journalist. "A panel of Education Fizzes" responds the professor. The barkeep frowns, "Okay, but you'll end up in the gutter." I know the punchline could be better . . . Education reform is no joke so Adam Bessie, assistant professor at Diablo Valley College, and Dan Archer, comics journalist, took on the education reform movement in their interactive comic featured at TruthOut.org. The first episode, The Disaster Capitalism Curriculum: The High Price of Education Reform and second episode, Murky Waters: The Education Debate in New Orleans take on the system while trying to make sense of how we teach our students. But before you click on the links -- it gets even better. Bessie and Archer designed their visual essay as a fully functional interactive comic with built in links to all their sou
Post a Comment
Read more

21 Classics That Make for Great Beach Reads includes some new classics and perennial favorites. So before you take your summer trip, pack your towel, slap on some sunscreen, and grab a book. Some favorites: 1. Their Eyes were Watching God by Zora Neale Hurston hits most of the usual beats of a contemporary beach read — love, danger, tragedy, and finding personal strength in rough times — but stands apart for its historical significance and hauntingly gorgeous prose. Written at the height of the Harlem Renaissance, for modern readers the story of Janie Crawford’s eventful, not always satisfying life offers up some excellent lessons in America’s racial and gender history. If you didn't read this in high school you should have. A real page turner. 2. The Stepford Wives by Ira Levin Beachy bibliophiles who want a little splash of sci-fi with their sun might want to give this classic thriller about a mysterious Connecticut suburb where all the wives lose their ambit
1 comment
Read more

Afghanistan: The Way It Was

I remember my mother wearing clothes like this when she went to the record store looking for 45s of her favorite songs. There were little booths where she would listen to records before buying them to play on our high fidelity record player at home. But this isn't a record store in downtown San Francisco, this is a record store in downtown Kabul in the 1960s. CSUEB's former president Mohammad Qayoumi had this to say about the Kabul of his childhood ‘Given the images people see on TV, many conclude Afghanistan never made it out of the Middle Ages. But that is not the Afghanistan I remember. I grew up in Kabul in the 1950s and ’60s. Stirred by the fact that news portrayals of the country’s history didn’t mesh with my own memories, I wanted to discover the truth. ‘Remembering Afghanistan’s hopeful past only makes its present misery seem more tragic. But it is important to know that disorder, terrorism, and violence against schools that educate girls are not inevitable. I
7 comments
Read more

What Makes a Book a Classic?

Mark Twain once said, "A classic is a book which people praise and don't read." On the other hand Italo Calvino, a Nobel Prize nominated writer and journalist believes “'Your' classic is a book to which you cannot remain indifferent, and which helps you define yourself in relation or even in opposition to it." In other words, it cancels out Twain's definition because a classic can't be "your" book if you don't read it. Brain Pickings provides Calvino's 14 Definitions of What Makes a Classic: 1. The classics are those books about which you usually hear people saying: 'I'm rereading…', never 'I'm reading….' 2. The classics are those books which constitute a treasured experience for those who have read and loved them; but they remain just as rich an experience for those who reserve the chance to read them for when they are in the best condition to enjoy them. 3. The classics are books which exerc
8 comments
Read more

Sometimes school just has to make you laugh! You know those pictures on the web, at places like quickmeme.com , that have the Success Kid photo with a caption that says something like, "Day off in the middle of the week. TWO FRIDAYS!" Bachelors Degree Online collected The 10 Best Colleges Memes from this School Year and some of them are really funny. Here's a couple of my favorites: Lazy College Senior I'm not sure I would just say this about seniors. C'mon it's funny! Considered the antithesis of College Freshman, Lazy College Senior drinks beer and deals with senioritis. Originally created in November 2011, this meme really took off with nearly 10,000 up votes prior to being archived. 10,000 votes! His parents must be so proud. Having been a returning college student this one made me giggle: Senior College Student I have also seen this one as "Corrects History Professor. Remembers Being There." This meme features Nola O
37 comments
Read more

Project Twins , a graphic design studio, created a visual study of obscure and endangered words. They use bold graphics and visual wit to interpret and represent a collection of strange, unusual and lost words. These are just a few examples, click on the link to see more. After opening the Project Twins site I was instantly struck with tarantism as I viewed graphic words with a feeling of xenization making me scripturient, thus this blog post. What do you think? Can you think of unusual words that could be instantly defined with pictures? Do graphics help you when defining a word? Acersecomic A person whose hair has never been cut. Biblioclasm The practice of destroying, often ceremoniously, books or other written material and media. Fanfaronade Swaggering; empty boasting; blustering manner or behavior; ostentatious display. Recumbentibus A knockout punch, either verbal or physical. Scripturient Possessing a violent desire to write. Tarant
19 comments
Read more

Elmore Leonard, author of Get Shorty , Out of Sight , and the small screen's Justified , offers some advice to would-be writers and even though his advice is for budding novelists, a great writer is just a great writer. Take Elmore Leonard's advice when writing your college essays. Some of Leonard’s suggestions appeared in a 2001 New York Times article that became the basis of his 2007 book, Elmore Leonard’s 10 Rules of Writing . Here are the basics: 1. Never open a book with the weather. If you open an essay with the weather, it better be a paper for a meteorology class. In other words, don't begin with a "It was a dark and stormy night." 2. Avoid prologues. Hmmm, prologues are a wind up to the action. Think of a prologue as your introduction. While an introduction is important you don't want to give too much away (or bore your readers with information that is common knowledge). Tell you reader what your paper is about and then get to it.
3 comments
Read more

Many college graduates face crushing student loan debt and discover, after they have landed their first out-of-college job, that starting wages don't begin to cover all of their expenses. American students owe over $1 trillion (yes, that's with a T) in student loans. According to the New York Times : For all [student] borrowers, the average debt in 2011 was $23,300, with 10 percent owing more than $54,000 and 3 percent more than $100,000, the Federal Reserve Bank of New York reports. Average debt for bachelor degree graduates who took out loans ranges from under $10,000 at elite schools like Princeton and Williams College, which have plenty of wealthy students and enormous endowments, to nearly $50,000 at some private colleges with less affluent students and less financial aid. Some parents who co-signed student loans, many now totaling over $100,000, have started taking out life insurance policies on their new graduates. But if you took out federal student loans,
4 comments
Read more
More posts