Showing posts from November, 2012
Show all

Robert Atwan, the founder and creator of the Best American Essays series, has read a lot of essays. “To my mind,” writes Atwan, “the best essays are deeply personal (that doesn’t necessarily mean autobiographical) and deeply engaged with issues and ideas. And the best essays show that the name of the genre is also a verb, so they demonstrate a mind in process–reflecting, trying-out, essaying.” As a college writer now specializing in essays you might want to take a look at Atwan's choices for style and organization. Here's his list of the Top Ten Essays Since 1950 along with links to online versions of five of the Top Ten Essays Since 1950: >James Baldwin, “Notes of a Native Son,” 1955. "Against a violent historical background, Baldwin recalls his deeply troubled relationship with his father and explores his growing awareness of himself as a black American." >Norman Mailer, “The White Negro,” 1957. "An essay that packed an enormou
Post a Comment
Read more 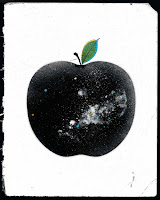 Can you guess what this picture illustrates? If you look at the context clues by reading the picture, what does the apple represent? Click on the apple for the bigger picture. Could it be the story of Adam and Eve? No? What about that universe inside the apple? Do you remember the story about Sir Isaac Newton and how an apple dropped on his head while napping and voila he realized there must be some force acting on the falling apple, and everything else for that matter. Over at BrainPickings they reviewed 75 Scientific Mysteries, Illustrated by Today's Hottest Artists , a book that explores scientific complexities through pictures, including gravity and the big bang. About gravity, Terry Matilsky notes: [T]he story is not finished. We know that general relativity is not the final answer, because we have not been able to synthesize gravity with the other known laws of physics in a comprehensive “theory of everything." Another artist illustrates his vision of
23 comments
Read more

The US in Japan

When you think of the Japanese you may think of pachinko machines, but when the Japanese think of Americans they picture Nicholas Cage square dancing? Do Japanese people think every American drives a pick-up truck while singing along to Beethoven? Cage played his "American-ness to the very hilt. When pachinko machine manufacturer Sankyo recruited Cage, they went all-out, getting him square-dancing in the middle of a lonely southwestern highway with a pack of metal ball-headed aliens" says Open Culture . But the Japanese aren't the only ones who stereotype foreigners. How do American commercials stereotype other cultures? Do you think these stereotypes are fair? Why or why not? Why do we stereotype?
29 comments
Read more

Being a teenage in ancient Rome wasn't easy. There were no X-box 360's to play or cars to drive, or even chariots to cruise around in. Don't get me wrong, there were chariots, but the only teens that got to drive them were those young men going off to fight the latest Roman war, or, if they were lucky enough, race around the colliseum, a sport that often resulted in death. According to A Glimpse of Teenage Life in Ancient Rome while your average American teenager devotes more than seven hours a day to imbibing media – to watching TV, playing video games, hanging out on Facebook — the average 17-year-old Roman kid (circa 73 AD) had some more serious business to deal with. Like mastering reading and writing in two languages, fighting in imperial wars, taking care of (obscenely young) spouses and various other items. See for yourself: The video was created by Ray Laurence, a classics professor, from the University of Kent. How is being a teen tough today? Do you s
48 comments
Read more
More posts