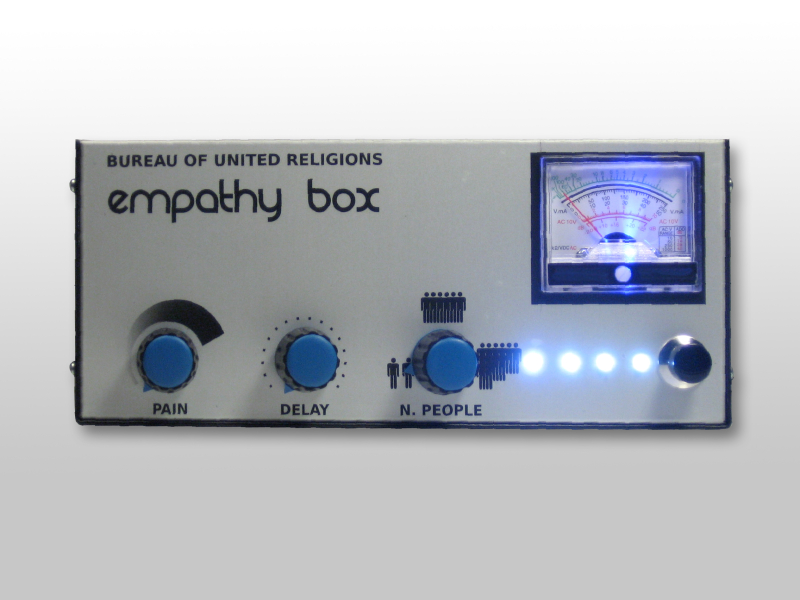 Philip K. Dick's Do Androids Dream of Electric Sheep? explores what it means to be human by looking at what it means to be an android. The big tell for androids; they can't empathize with each other, with humans or animals. To determine an andy from a human, there is the elaborate Voight Kampff test that measures empathetic response to a series of questions. Each question should elicit some kind of sympathetic response. If no dilation of the pupil or blush response, then you are dealing with an android.Seems pretty straight forward and since it's science fiction, we know it works (at least in the novel).

As humans empathy cues us to feed a crying child while an anguished look tells us to help out a pained friend and requires communication -- we can read both smiles (pleasure) and suffering (pain). It's more than just putting yourself in another's shoes, it's caring about what happens to the person in your sneakers.

At the University of Virginia, James Coan, psychology professor, "and his U.Va. colleagues conducted [a] study with 22 young adult participants who underwent fMRI scans of their brains during experiments to monitor brain activity while under threat of receiving mild electrical shocks to themselves or to a friend or stranger.

“The correlation between self and friend was remarkably similar,” Coan said. “The finding shows the brain’s remarkable capacity to model self to others; that people close to us become a part of ourselves, and that is not just metaphor or poetry, it’s very real. Literally we are under threat when a friend is under threat. But not so when a stranger is under threat” (read the entire study).

But are we as empathetic as we were in the past? Are we weening ourselves away from empathy as we become more and more tech savvy?

Sherry Turkle's article, "Stop Googline. Let's Talk" (NYT 26 Sept. 2015) looked at that very phenomenon. "In 2010, a team at the University of Michigan led by the psychologist Sara Konrath put together the findings of 72 studies that were conducted over a 30-year period. They found a 40 percent decline in empathy among college students, with most of the decline taking place after 2000."

Turkle's not saying there are no empathetic conversations today, instead for the MIT researcher it's the idea that "we turn away from talking face to face to chat online. It’s that we don’t allow these conversations to happen in the first place because we keep our phones in the landscape." Does the rise of technology correlate to a decline in empathy? Do we care more about what's happening on our iPhone then we do about our friends? How many times have you gone out to lunch where everyone has one eye on their phones and one ear on the conversation?

Philip K. Dick may have been prescient about the human condition and empathy, or more strictly speaking, that as we lose empathy we lose part of what makes us human. Have we become the androids who dream of electric sheep?

Do you think your emoji response on Facebook is as meaningful to the receiver as a face-to-face "Congratulations"? When was the last time you truly engaged in a two-way, face-to-face conversation? What do you think it means if humans quit empathizing with each other? Would you suffer an electric shock for a friend?
brain Do Androids Dream of Electric Sheep empathy Philip K. Dick science fiction Stop googling. Let's Talk Turkle Voight Kampff