In Honor of Comic Comic Con and the Olympics 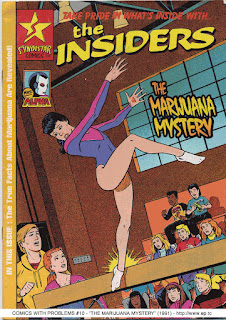 Since I'm feeling sorry for myself after reading all the exciting posts from my friends at San Diego Comic Con, here's a comic website that will make you smile -- Comics with Problems. Today let's take a look at "The Insiders: The Marijuana Mystery".

This comic from 1991 features Holly, a gymnast aspiring to win the state championship, who has a crush on Mike, a popular jock and failing student. Holly offers to tutor Mike hoping he'll ask her to the prom, but instead he rewards her with marijuana. She takes one toke off a joint and immediately quits studying for tests and misses gymnastic's practice. When she makes it back to practice she gets injured and can't go to the state championships. After confessing to her best friend that all of her new problems are due to marijuana, there's a robot intervention.

Here's the facts laid out in this comic about marijuana abuse as delivered by Alpha the Robot:


[BEEP.] Marijuana impairs a person's thinking, making it hard to learn and remember.

[BEEP]. Marijuana affects the natural balance of hormones which build a healthy body.

[BEEP]. It also impairs the immune system's ability to prevent disease and illness.

[BEEP]. THC remains in the body, trapped in fatty tissue.

[BEEP]. Marijuana is a gateway drug.

After learning about marijuana, Holly's response is to educate Mike so he doesn't "get hurt." It doesn't work, so she goes to the school counselor and gets Mike some help. Hmmm, I'm not sure about that.

We can argue all day long about the validity of Alpha's claims, but I suppose if your audience is made up of 8-year-olds this might be a comic to read with them, but then again, I don't think I want my 8-year-old even thinking about smoking pot.

Oh, and what's up with the title, "The Marijuana Mystery." It reminded me of the Scooby Doo Mysteries I loved as a kid, but I was sorely disappointed. There is no mystery. Marijuana is EVIL . . . end of story.

And, what's up the visual and textual sexual innuendo and double entendre? Were the writers and artists just goofing? Were they even aware of all the sexy bits? Were they high?

I hope all those gymnasts in Brazil have read this, so they don't get hurt. Do you think "Marijuana Mystery" seems silly because it was produced for a 1991 audience? What do you think junior high students today would think about this comic? If you were to make a PSA comic today directed at junior high school students, what would it be about and how would you title it?
comics marijuana scooby doo the insiders