Why do we have an Electoral College? 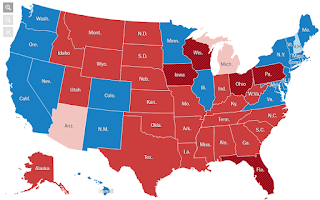 In the U.S.A. we do not elect presidents by popular vote. We elect electors who then cast their vote for the candidate. The number of Electoral College votes in each state is based on the total number of U.S. representatives and U.S. senators.

The 2016 presidential electoral results map shows you how the electors in each state will cast their votes. The red states represent where the Republican, Donald Trump will receive all the elector votes and the blue states indicate where the Democrat, Hillary Clinton will receive those votes. A candidate needs 270 electoral votes to win. Many are upset because it looks like Hillary Clinton will earn more popular votes--and this isn't the first time this has happened (1824, 1876, 1888, 2000).

So why do we have an electoral college if we don't elect the person who earned all the votes? The Electoral College was created by the writers of the constitution, and while we may think this is an antiquated vote against democracy, let's take a closer look.

First, our nation is not a democracy. Our country is a constitutional republic. The Electoral College was put in place, partly, to protect the nation from a "tyranny of the majority". Pure democracies have been likened to "two wolves and a lamb deciding what's for dinner." You can see how that wouldn't work for the lamb.

Not every reason for the Electoral College was a good one. The New York Times reminds voters,"Above all, some historians point to the critical role that slavery played in the formation of the system. Southern delegates to the 1787 Constitutional Convention, most prominently James Madison of Virginia, were concerned that their constituents would be outnumbered by Northerners. The Three-Fifths Compromise, however, allowed states to count each slave as three-fifths of a person — enough, at the time, to ensure a Southern majority in presidential races." Why would we do this? In the early days of our republic, we needed the slave-holding states in order to fight (and win) the Revolutionary War that created this country.

There are other reasons too, chief among them was that "The founding fathers sought to ensure that residents in states with smaller populations were not ignored."

The avoidance of pure majority rule is also why the United States has three branches of government, the legislative, judicial, and executive; a senate with two representatives from each state no matter the population; and a legislature with representation based solely on population.

So why was this important and why do some believe this is still important today? First, a candidate has to build a nationwide coalition to earn the most electoral college votes. The writers of the constitution believed it would make presidents more moderate and diverse. Secondly, if we lived in a pure democracy, candidates would only need to go to the largest cities in order to win the presidency. In other words, why would you need to be moderate or diverse, if you just needed three states?

But there are ways to change the way electoral college votes are cast. "Some states have discussed a possibility that would not necessarily require amending the Constitution: jettisoning the winner-take-all system, in which a single candidate is awarded all of a state’s electoral votes — regardless of the popular vote — and instead apportioning them to reflect the breakdown of each state’s popular vote. Two states, Maine and Nebraska, already do this."

What do you think about changing the way Electoral College votes are cast? How could we create a system where everyone's voice was heard from the smallest town to the largest city?
2016 election constitution electoral college voting