Sarah Palin: The Best Thing to Happen to American History?

During the 2008 presidential election, I taught English at an institute of higher learning where the class focused on politics. What a great way for students to learn something about the presidential candidates, American history, and critical thinking. Throughout the quarter, we had lively and spirited conversations about the limitations on free speech and the press.

For the final, I asked students to analyze a political cartoon that spoofed The New York Times for releasing sensitive material. This Times was dated April 17, 1775 and displayed a drawing of the old north church with headlines that read “One if by land; two if by sea. Secret Lantern Signals of American Colonists Revealed.” The first couple of paragraphs stated that an anonymous source had revealed the “secret plan for tomorrow to warn Patriot Colonist Militia Forces of the route the English Regular Soldiers plan to take as they move their forces to Lexington and Concord.” Student essays were to focus on how political cartoons satirically criticize widely held beliefs, while at the same time considering limits (if any) on a free press. This particular political cartoon referred to a well-known event in American history—Paul Revere’s ride—but with a twist. What if these headlines had appeared in American newspapers in April 1775? How does this cartoonist’s opinion relate to the political climate of 2008? 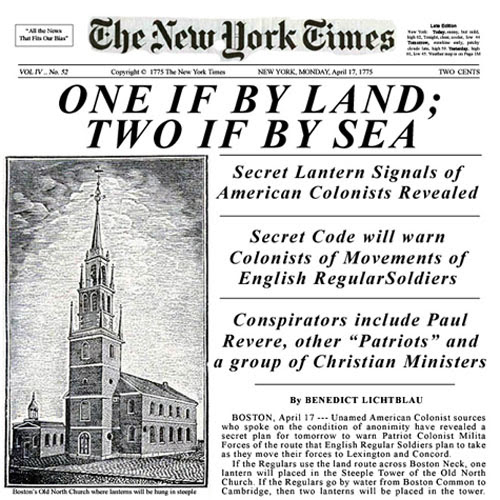 After twenty minutes of complete silence, I asked the class of California natives, “What’s up? This isn’t a take home final.”

“You know. ‘Listen my children and you shall hear of the midnight ride of Paul Revere’? He warned the colonists about the British invading. One if by land, two if by sea?”

Blank stares. Needless to say, we engaged in an impromptu lesson about Colonial American History–with the help of Google—and students got to take their exams home. But if I gave that same exam today, would I get the same dull reaction? I doubt it.

Recently, when googling “Paul Revere’s ride” the first entry describes how politicians, namely Sarah Palin, are dumbing us down. And whether you love her or hate her, you have to hand it to the former VP candidate for single handedly saving Paul Revere’s legacy.

Were there bells going off in Palin’s head when she talked about Revere warning the British, or the British grabbing American, or rather, British subjects’ guns? How could she be so ignorant of basic American history? Apparently, it’s accidental congruence. Allison Block of NPR asked Professor Robert Allison of Suffolk University, “So Sarah Palin got her history right?”

“Well, yeah, she did. And remember, she is a politician. She's not an historian. And God help us when historians start acting like politicians, and I suppose when politicians start writing history.” Huh? Let’s for one second ignore whether Palin is correct, incorrect, practicing nuanced subtlety, or some other iteration of political maneuvering, and look at it the way Professor Allison did, “Suddenly, Sarah Palin comes to town, makes an off-the-cuff remark about what she learned, and suddenly, you're calling me to find out what I think about Paul Revere and the American Revolution.”

Is Sarah Palin some kind of evil genius?

Whether you love Palin or hate her, she is the greatest thing that has happened to American history in recent memory. One person’s comments sparked a Paul Revere history debate—on Washington Post.com there are 384 related articles about Sarah’s comments. 384! It even made it across the pond with The Telegraph headlining “Sarah Palin defends knowledge of American history.” It’s on the nightly news, the morning talk shows, the internet news, blogs, and fodder around the workplace water cooler. How cool is that? Very cool, especially for connoisseurs of American history and plain old American citizens.

What’s even better, Palin, or rather, the media does this all the time. At a Tea Party rally, Palin crowed, “Party like its 1773,” sparking outright derision from some who asked, “Doesn’t she know the Declaration of Independence was signed in 1776?” She probably does, but the Boston Tea Party hit the harbor in 1773. That historical tidbit had long since departed my memory banks until Palin screwed up, errrr, I mean acted like an evil genius, or whatever plan she had in mind that day as I clicked through ten channels before learning that, ummmmm….Gwen Ifill had it wrong. Dare we admit Sarah Palin is right?

So Sarah Palin, do all Americans a favor and keep it up. We could all use the history lessons.
academics critical thinking literacy media rhetoric the web visual texts