July 30, 2011
Visuals are the way most of us receive information and good visuals can be very powerful.

That's One Trillion Dollars and the caption partly reads: "If you spent $1 million a day since Jesus was born, you would have not spent $1 trillion by now...but ~$700 billion- same amount the banks got during bailout." Those double stacked pallets would cover an entire football field.

"If you live in USA this is also your personal credit card bill; you are responsible along with everyone else to pay this back."

Visit USDebt.kleptocracy.us/ to see even more debt visuals including one of the U.S.'s unfunded liabilities.

Tables are a very common way to visualize data and the internet can take that a step farther by allowing visual motion. The U.S. National Debt Clock is a real-time, ever-changing running debt clock table. It is not a static data table, it constantly changes. 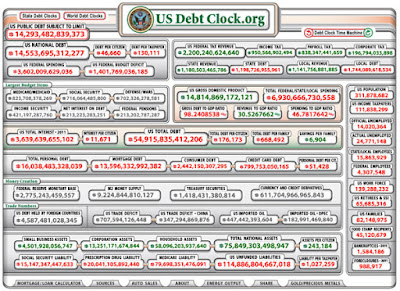 After looking at the illustrations of the "U.S. debt problem visualized", why do you think the creators made visual statements rather than just giving readers dollar figures? Why include the Statue of Liberty?

How does the U.S. National Debt clock create urgency?

How do U.S. debt visuals alter your perception about the U.S. debt? Do you find them disturbing or reassuring?
critical thinking Visual Medium visual texts