Virgil tells him “your eyesight is deceived by distance . . . these are not towers, but giants and, from the navel down, each stands behind the bank that rings the pit.”

They approach one who just talks nonsense. Virgil says, “This is Nimrod, because of whose vile plan the world no longer speaks a single tongue” to remind readers of his association with the Tower of Babel and the resulting confusion of language. Virgil brushes off Nimrod and they proceed. 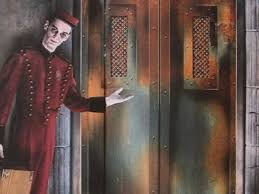 They see the chained giant Epihialtes who “joined the great assault when giants put gods in fear” during classical times. In other words, he tried to rebel against the gods—not a good move.

Antaeus, another classical giant famous for losing to Hercules is next (remember Danté borrows from many literary and mythological sources), and they will use him as an elevator to “set us down in the very depth of sin.”

Virgil gets Antaeus to help out by telling him Danté “still can make you famous in the world, because he lives, and hopes for years of living.” In other words, he can make you famous. Antaeus complies setting them “gently on the bottom that swallows Lucifer with Judas.”

Circle nine is also broken into parts, like circle eight. Instead of boligas, however the different sections are called rounds. 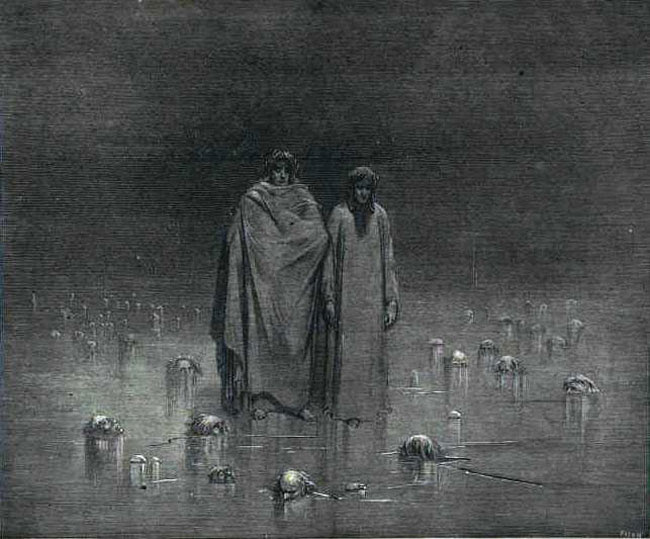 And you thought Hell was full of fire and brimstone. Danté can’t “describe the very bottom of the universe.”
A voice says “Watch where you walk. Step so as not to tread upon our heads.” Danté looks down and “under my feet I saw a lake so frozen that it seemed more glass than water.” Those sinners were trapped iced in up to their mouths. This is the ice of circle nine, Cocytus.

Round One – Caina, named after Cain who killed his own brother. Danté asks a pair whose hair has iced together, “Who are you?” They look up and “dripped tears down to their lips, and icy air then froze those tears” just before they began ramming their heads against one another. These are two brothers who hate each other and are trapped frozen together, forever.

One brother, Camiscion de’ Pazzi, points out Mordred who killed King Arthur (in the French novel Morte d’ Arthur) and Focaccia, a Guelph, who murdered various relatives, and Sassol Mascheroni, a Florneintine, who murdered a relative over inheritance. But worst of all hasn’t arrive yet, one Carlino who will be arriving soon after betraying a White Guelph stronghold for money.

“After that I saw a thousand faces purple with the cold, so that I shudder still—and always will—when I come to a frozen ford.”

Round two – Antenora, named after Antenora of Troy, a traitor who betrayed his city to the Greeks. Danté kicks a sinner hard in the face. “Why pick on me?” he asks.

Danté questions him and discovers it is Bocca degli Abati who is a “‘vile traitor . . . to your shame shall I bring back true news of you.’” Degli Abati was a member of the Florentine Guelph army who cut off the arm of the standard-bearer ensuring a disastrous defeat of the Guelphs at the hands of the Ghibellines (remember, Danté is a Guelph).

A couple more traitors are revealed, Tesauro de’ Beccheria who treacherously assisted the Florentine Ghibellines and was beheaded and Gianni de’ Soldanieri , another Ghebelline who betrayed his own party after their defeat at Benevento.

Two men are stuck in the same hole where one gnaws on the other’s head for eternity as a “famished man will bite into his bread.” And, of course, Danté wants to speak with them. 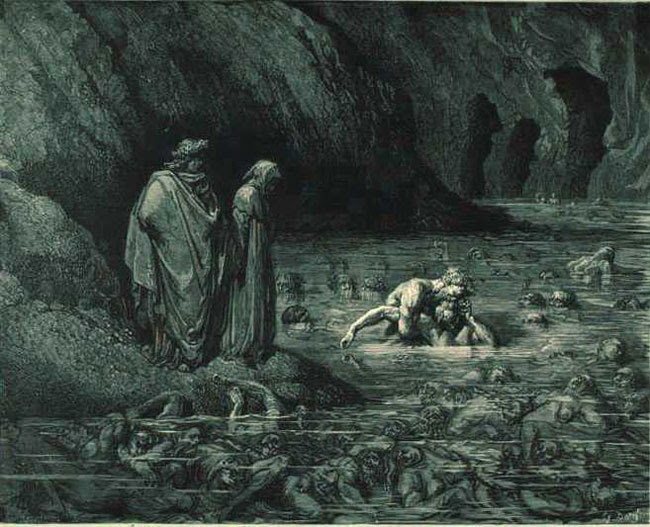 Count Ugolino “raised his mouth from his atrocious meal, that sinner, and wiped it on the hair of the very head he had been ravaging” to tell his gruesome tale. Archbishop Ruggieri whose head Ugolino is gnawing on, betrayed their cities and then Ruggieri cooked up some excuse to be rid of his partner-in-crime. He has Ugolino,“his two sons and two grandsons locked in a tower.”

At one point during their captivity, Ugolino “awoke before the dawn of the day I heard my children, in that prison with me, weep in their sleep and ask for bread.” But instead of food “down below I heard them nailing shut the entry to the dreadful tower.” Ugolino’s sorrow “made me gnaw my hands” and the children imaging him starving said, “Father, we would suffer less if you would feed on us.”

On the fourth day, one of this children died, then another “on the fifth and the sixth.” He was blinded from hunger and “for two days called to them, though they were dead. Then fasting had more power than grief.” You can guess what that means; his hunger overcame his revulsion of human flesh.

Ugolino breaks off to gnaw at Ruggieri’s skull. Danté is moved, believing that Pisa “should not have put his children to such torture.”

Danté then feels a “breath of wind” even though “the cold had made all feeling leave my face.” Virgil says only that “your eyes will give an answer, seeing the source that puts out such a blast.” In other words, the devil is near.

The two move farther along and reach the next round, Ptolomea. This round seems to punish those who deliver treachery to guests. Ptolomey invited his father-in-law and brothers-in-law to a banquet, and once they had imbibed some alcohol, he slew them. And you thought you had treacherous relatives?

Next they meet Fra. Alberigo who invited some relatives to dinner with whom he had a dispute. Once the fruit course was called for assassins fell on his guests “here, for figs, I am repaid in dates.” But, before he made it to hell, his “body [was] taken by a devil, who was then in control until the time allotted it has run.” He says the shade he is stuck with still walks the earth as one Branca d’Oria, a man who murdered his father-in-law. Fiction is stranger than real life, d’Oria was still alive when this was written, and outlived Danté dying in 1325, living well into his nineties. I wonder if he enjoyed his vacation?

Fra. Alberigo asks Danté to clear the ice from his eyes three times during this discussion, which Danté has promised, but once he gets what he wants, he simply refuses. Is that Christian behavior? Or is Danté finally fed up with all these sinners.

The final canto of The Inferno opens with the Latin phrase “Vexilla regis produent inferno” meaning “The banners of the King of Hell drew closer.”

In the final round of the circle “the shades were wholly covered [by the ice], show through like bits of straw in glass,” like imperfections stuck in every which way.

Virgil points out Dis (the classical name for the king of hell), and Danté became “faint and frozen” neither alive or dead, just “deprived of either state.”

Satan is a giant, and “if he was fair is hideous now, and raised his brow in scorn of his creator.” He has three faces; one in front, the other two above each shoulder, “and all the three united at the crest.” They are winged, three sets “featherless and fashioned like a bat’s wings. When he flapped them, he sent forth three separate winds, the sources of the ice upon Cocytus.”

Satan is chewing on three sinners. The middle head contains the “soul up there who bears the greatest pain . . . is Judas Iscariot who has his head within and outside flails his legs.” Judas betrayed Jesus to the Romans.

The other mouths hold Brutus and Cassius, the betrayers of Julius Caeser, and in Danté’s view, the destroyers of Rome and Italy.

So the worst, final, deepest, coldest, circle of hell is reserved for those who are traitors to their lords, kings, and benefactors.

Virgil tells Danté night is rising in the sky. It is time for us to leave, for we have seen it all.” And the two scamper down the body of Satan through the center of the Earth and arrive at “a natural dungeon, rough underfoot and wanting light.” They follow the sound of a stream until they step outside and “see, through a round opening, a few of those fair things the heavens bear. Then we came forth, to see again the stars.” 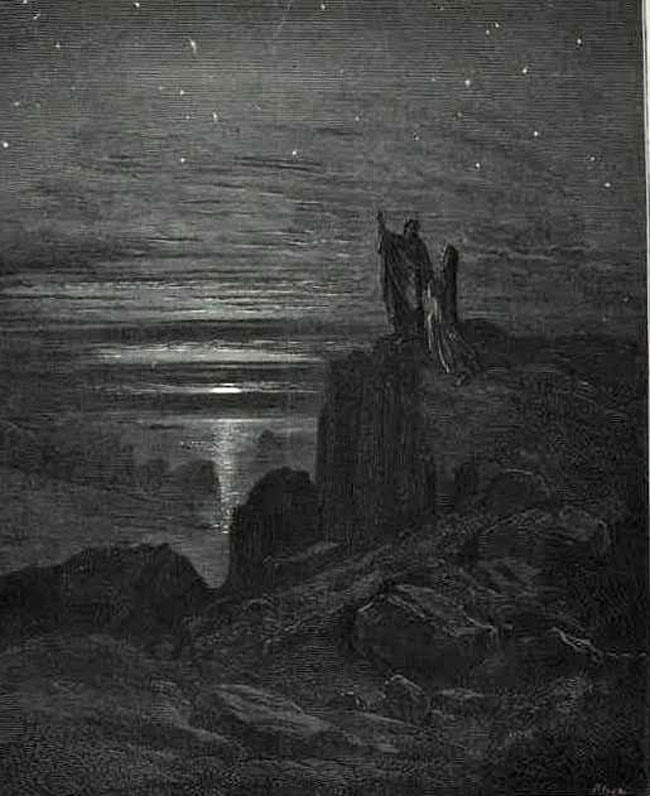 Congratulations! You have made your way back out to see the stars. Would you go on through purgatory? How do you feel about Danté and Virgil as characters? Do you feel sorry for any of the sinners? Which ones? How about Virgil? Do you believe he should be consigned to limbo?

Treachery against relatives, home and country, guests, lords and benefactors is the worst of all sins according to Danté. Do you see it the same way? Is treachery worse than murder, pandering, theft? Why or why not?